The hospital offers high-quality accessible and affordable (largely subsidized) healthcare for the residents of the Gbonkolenken chiefdom, of which Yele is the focal point, the nearby Valunia chiefdom, and the Kamajei chiefdom, with a joint population of about 111.500 residents. 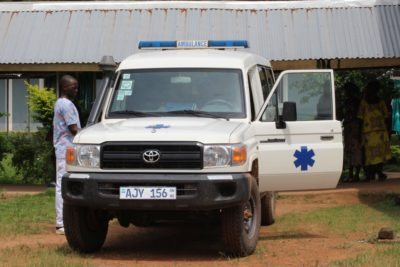 The health system provided only a few Primary Health Units (PHUs) where only very basic care could be provided. The importance of more extensive care was therefore very important.

Started as a small outpatient clinic, the Lion Heart Medical Center has now grown into a fully-fledged hospital with 70 beds, an operating room, a maternity ward, a children's ward with a sub-ward for malnourished children, an adult ward, an isolation ward that meets the WHO standards, and a department for patients with chronic wounds and fractures. In addition, there is a laboratory with a blood bank, the possibility of making ultrasound scans and an X-ray machine, which is unfortunately currently out of use [link to DONEER]. The hospital also has two ambulances to collect emergencies from hard-to-reach areas.

With a hydroelectric power plant nearby and solar panels on the roof, the hospital tries (if the weather permits) to be self-sufficient in terms of electricity and water.

Every month, between 800 and 1200 patients, 60 à 70 operations are performed and between 30 and 50 deliveries, but without our dedicated staff we would be nowhere.

Thanks to the 70 studious and motivated staff of the hospital, also known as the Lion Heart Family, the Lion Heart Medical Center can continue to provide good care, every day and night, from early in the morning to late at night, until so late as needed. Without complaining, even if they are very long days or due to illness there is actually not enough staff. Because they are happy that they can give good care to their grandfathers, grandmothers, fathers, mothers, men, women, sons and daughters, their neighbors, their countrymen. Because they are grateful for their job, and because of this they have the money to buy food and send their children to school, give them a future. Because it is not yet commonplace in Sierra Leone that people can provide for their basic needs. Many people cannot afford a meal three times a day.

Sierra Leone has one of the highest rates of maternal and infant mortality in the world. The reason for this is a lack of proper medical care and guidance during pregnancy and insufficient knowledge among (often young) mothers. Additional problems are poor hygiene, due to little or no sanitation and lack of clean drinking water.

One of the spearheads of the Lion Heart Medical Center is the reduction of maternal and infant mortality, and teen pregnancies in particular. We want to achieve this through good and accessible medical care. In addition, we want to contribute to the growth in knowledge about (the prevention of) pregnancies and safe sex. To achieve this and to improve cooperation with local government institutions, we have developed the 'Healthy Baby Voucher Program'.

Diseases that are frequently treated in the hospital are malaria, anemia, malnutrition, respiratory infections, stomach ulcers, hepatitis B and parasitic infections. Twenty percent of children under the age of five die in Sierre Leone, malaria is one of the biggest causes of this.

In 2014, Sierra Leone was in the news internationally due to an outbreak of the deadly Ebola virus. This virus spread rapidly across the country, reaching the Lion Heart Medical Center. The Dutch doctors were (as one of the last in the country) repatriated, four local nurses died. The hospital had to quarantine for a while, which meant that it was not possible to offer 'normal' healthcare. This is also called the 'Hidden Toll of Ebola'; In addition to the victims that the virus has claimed itself, many more have fallen due to the lack of 'normal' healthcare. the Lancet: thelancet.com/journals.

Thanks to support from the Dutch government and many other sponsors, the hospital was able to quickly open its doors again. Sierra Leone was declared Ebola-free in March 2016.

National Geographic made an impressive photo reportage about Ebola in Sierra Leone: nationalgeographic.com

Help us make our hospital independent. That can be done in different ways. For example, you can make a one-off donation, authorize us to make a monthly donation or help us in kind. You can read all about it on our pages to donate en help out.